This weekend, we’re doing it. We have the spot. We’ve planned the menus, and arranged the carpools. It’s Writing Retreat Time!

Whether it’s called a Night/Day/Weekend of Writing Dangerously (per NaNoWriMo) or Shut Up and Write (a la The Thesis Whisperer) is incidental. I’ve done a variety of these writing camps/retreats over the years, some with friends, some individually. Some are for academic projects, some have been for fiction. A couple times, it was for reading/studying, not writing. Sometimes it’s an overnight, sometimes a long weekend, and a few times, it was an entire week.

Like a good brownie recipe, the basic approach is the same. Once that part is down, you can throw whatever extras you want in there, serve it in different ways, or experiment with new twists. So the basic brownie for this is: several structured, uninterrupted goal-oriented days of writing/work. And because I am hyper-massive Type A, and love few things more than a bullet-point list, I have all sorts of material that we’ve incorporated. Allow me to share!

If you want to have a Writing Retreat of your own, first of all, it’s recommended that you plan as much ahead of time as you can. You don’t want to lose a chunk of one day running from store to store, or trying to figure out which manuscript you want to tackle. Pre-prepare your SMART goals, make-ahead meals, a rotating shower schedule depending on how many people are there. If you’re just going to order pizza or take-away, know ahead of time from where and when. Write out a schedule, send it out beforehand, and stick to it. (And, if you’re me, plan themes, details, accoutrements, settings, and breaks, too.)

What project(s) do you want to work on? What are your central objectives re: your project(s)? Don’t leave it open and see what you feel like doing on that day,  because chances are, you’ll open seven different things and bounce around from one window to the other, trying to figure out where your interests are. Instead, use a Writing Retreat to zero in on a single specific writing project: finishing/starting a draft of something, editing a manuscript, finishing a thesis chapter or an article, writing a certain number of blog posts or flash fiction pieces. Set a SMART goal and center your writing around that:

My goal for this weekend is simple but scary: finish this final draft revision of A Scandalous Reputation.

Since I’ve been swamped these last months with critical work, and just finished two huge article revisions, I need to focus on getting this project done. I need to spend some quality time with Margaret and Hal, with my earlier drafts, and with my revision notes, and push through to the end, so that I have more than one manuscript to submit this summer. I have somewhere between three to five chapters left to wrap things up, and a solid outline so that I know basically where things are going. I’m sure there will be surprises, since I’m adding several new scenes to this draft, including new characters and a plot twist, that didn’t exist before. But in general, I have a road map to my final destination.

This time around, we are doing Friday evening to Sunday evening. We’ll kick off each session with goal-setting; at this point, with these people, all of us know who is working on what. It’s five of us who have been doing this here for three and four years now. But no matter what the situation, at a Retreat, it’s important to stop and announce your goals, and to hear others’. That is, in fact, one of the points of these things.

Our days are going to involve at least 6-7 hours of writing, including a breaks for meals, coffee, and walks/exercise/dance breaks. This isn’t a vacation where you sleep in until whenever and do whatever whenever whoever is ready, after all. The schedule helps with accountability, in fact. Also, it helps to make sure that everyone is on the same page (ish) with what times to start or stop, so that if there are three people who want to get up and going at 6am, people like me who don’t function before 8 can plan our morning meet up over coffee accordingly, after they’ve been writing for 2 hours. Luckily, that isn’t an issue this time.

Each of us is taking one meal prep (I have my waffle iron for Sunday brunch at noon), and each of us is bringing/preparing one snack-related something or other. (I’ve volunteered my famous chai hot chocolate.) We’re going to a friend’s parents’ home, so there will be a few idyllic walks on our breaks, should the weather cooperate. We are doing a variety of projects, not just fiction, so we won’t be using writing prompts this time, however, we have stashes of them for other writing group activities. We also don’t have time for chapter exchanges this weekend, but will likely do that after.

Sometimes, especially with longer retreats, we’ll schedule additional things. Or on my individual Writing Camp/Study Camp weeks, I’ll include extra things in the evenings, like

But there is no end to the possibilities for how to plan your own Writing Retreat, or how elaborate or simple you can make it. You might pick a…

The only thing I love more than a bullet-point list is a theme! I have stacks of cookbooks and recipes related to every possible literary event you could think of. And, as you might guess, I make excellent use of my tea service here as well. Sometimes the logistics of the Retreat itself will suggest a theme. Sometimes everyone will be working on a similar project or, in one case, having an all-night reading of the same book, which will lend itself to a theme. The theme, then, informs everything from food to setting to music to our work itself.

Maybe in future blogs, I’ll do more detailed breakdowns of how to host one of these themed retreats, who knows?

Of course, you don’t have to have a theme. “Writing” is, indeed, enough of a theme. Still, sometimes it helps make it more fun and more effective. Some of the ones we’ve done before included:

Keep your meals on theme, too: have big, fresh salads, or a pot of soup, or smoothies, or a collection of spa cuisine ordered to go from a local place. Have a pitcher of ice water with fresh mint and cucumber slices, or a ginger-herb limeade, or green juice. Get a good night’s sleep.

Setting is important, but that doesn’t mean it has to be fancy to be effective. I’ve hosted and participated in a number of retreats, from a friend’s cabin in the Blue Ridge Mountains to our dorm to an apartment on the Île de la Cité to various literary environs around Boston to a corner in the local coffeehouse. If you can plan a get-away to a house in the desert with friends, or a historic site that factors into your story, or a city that’s mid-point for several of you to meet up, great. But there are distinct advantages to the at-home retreat, too.

Most important is to make sure you have no distractions, so you can focus for hours at a time. If your home includes pets, spouses/partners, roommates, kids, laundry, or a noisy neighborhood, consider doing something someplace else. If you’re doing a destination, I’d recommend picking one or two close places and sticking to them instead of involving a whole lot of travel from one place to another.

Also, make sure there is WiFi available. Even if you want to have an “unplugged” writing environment to minimize distractions, some people will need wireless to listen to music, access materials, and even open documents in the first place. During timed writing sprints, everyone can agree to turn off their own computers’ connections.

There are so many beautiful nooks and places in the world, too, and writing retreats give you a good excuse to explore. Try:

You don’t have to go overboard planning meals for a writing retreat like I do. But as I’ve said before, I find cooking a relaxing break from writing, so I enjoy an hour or two of insane kitchen time as part of a retreat, even if it’s just me. Usually, our retreats involve a person or two volunteering to make one meal, and everyone cleaning up after, or some kind of pot luck where each person can prepare something that might be served in their novel/WIP. (This is a fun way to get to know others’ works, too.) However, if you don’t want to bother with cooking anything, much less themed menus, I’ll also say it again: at the very least, plan ahead of time which night is going to be pizza-ordering, and which night is going to be Thai delivery, so you don’t waste valuable retreat time trying to sort things out. But if you’re up for a themed menu, think about:

Despite my jokes about whiskey, I generally don’t drink a lot of alcohol in general, and I’ve found that too much of it on a writing retreat is not great for productivity. That said, I know a few friends have had much fun with a night or two of drunk editing, so YMMV. There are certainly a ton of literary-themed cocktail recipes and books out there, too, so a ceremonial glass raised a la Hemingway and Parker is not amiss. But I’m more likely to have a pot of hot chocolate or tea, or a carafe of (I hate to use the term, but still) “spa water” instead of bottles of hard stuff for a Writing Retreat. But that doesn’t mean a bit of good port at the end of the day might not be acceptable. Some of my favorite writing beverages include:

This weekend’s writing camp will involve headphones, because a couple participants can’t write with music on. But in past retreats, we’ve had a couple of approaches, including everyone taking 2 hours of music with their own WIP playlists. Obviously, any reader of this blog knows my own penchant for soundtracks based on what I’m currently writing. I also recommend playlists of:

Sure, you can throw on the ratty sweatshirts. (I don’t recommend costumes. No matter how skilled at steampunk/cosplay/garb you are, you do NOT want to sit all day writing in a corset. No.) But I know I feel more deeply creative when I’m in one of my designated writing t-shirt. Yes, I have a stash of them, and yes, that stash is specifically for writerly events and off-hours at conferences. My all time favorites are: 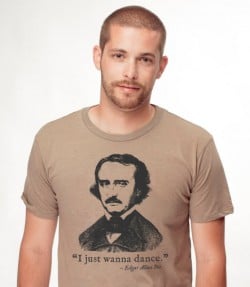 So what about you? Ideas, suggestions, shares? Want to set some goals for this weekend…?

Because you know the teapot’ll be on, darling!